The artwork of Ancient Greece influenced the world of art in several ways. It impacted much detail to sculpture within pottery and created the foundation for the materials (stone, marble, limestone, clay) that we use today. This included imagery and going beyond the closed curtain of whats seen by the naked eye. 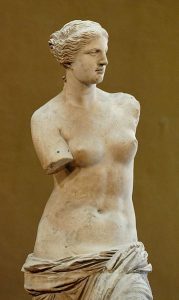 The art of Archaic Greece (700-400 BC) featured the legacy of cultures with many geometric and abstract works. This involved sculptures called Kouroi which were men and Korai which were women. The beliefs to these rigid and heavy sophistication began from their human civilizations flourishing into their art. Elements of realistic human anatomy, often depicted walking in their sculptures.

The Hellenistic period (323-31 BC) focused largely on the connection to the artist emotions. The Greeks began a journey within sculpture where they depicted people they had conquered. Their imagery was influenced by their culture and events that were taking place at the time. This began the art of story telling, based on themes, and violence. 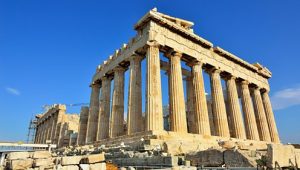 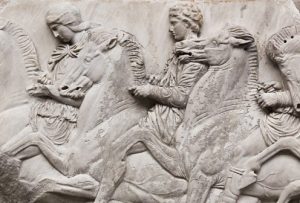 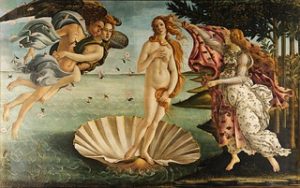 The Birth of Venus

The Parthenon was and still is one of the greatest known buildings in the world that is a high influence of Greek art.  Originally a temple to the goddess Athena, and overlooking Athens. It featured tapered columns and extra ordinary characteristics of life like sculptures. The Parthenon became the architectural role model for future civilizations and had remained largely intact until the 17th century.

During the rise of the Roman empire (146 BC), the Romans adopted the culture and art traditions within the ancient greeks. For the Romans the art of the Greeks surpassed their own and spread quickly around their vast empire and left traces for future generations to uncover. At the end of the Roman Empire, Greek art continued to spread in the East (600 AD). Much like the Ancient Romans, Britain duplicated Greek art in architecture and claimed to be the successor to Ancient Greek civilization. Art from antiquity was soon unearthed and rediscovered. Forgotten for centuries, in the 1500’s these fractures of masterpieces inspired Renaissance painters and sculptures like Leonardo da Vinci and Michelangelo. The art of the Renaissance spread the influence of Greek art throughout Europe. During the 1600’s the influence of Greek art extended beyond sculpture and painting. Creating movement, drama, human figurative form, and action of life and living flesh. Artist Peter Paul Rubens has depicted and had been directly influenced by ancient greek art and kept art alive in new forms for centuries of its kind.

Greek Art was and still is the influential Hero of Art historically and for future generations.

Experience the wonder of soaking in ancient art with your own eyes!  Join Zoe Yoga Lifestyle for Travel Deeper Retreats to Greece and Italy!

To ensure personal attention and an authentic cultural experience, retreats are limited to 10 travelers. Join the email list to receive exclusive advanced notice of trip dates and itineraries as soon as they are determined.

There are no upcoming events at this time.